A Movie Review from the Delaney Library: Dreamkeeper 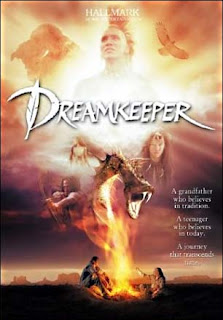 In Dreamkeeper by director Steve Barron and writer John Fusco, a grandson learns the ways of life through the stories told to him by his grandfather. This coming of age story was well-received by Native American critics and won the American Indian Movie Award for best film. Dreamkeeper was made for TV in 2003, with visual effects that may remind you of a movie from the 90’s. However, the stories told have meaningful lessons, and the movie represents several distinct tribes and claims to have consulted with tribal members for authentic representation - including Lakota, Cheyenne, and Crow – rather than lumping all Native Americans into one group.

Review by student worker Tia Flippin
Posted by jenpack at 7:00 AM

go to the CSWS home page